We have learned from the adjectives variations by gender and whether the adjective is part of AKK or Dativ.
As configured diminutives of nouns: Bierchen (-chen) and Fräulein (-lein) 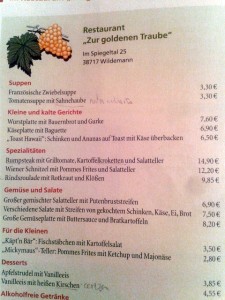 Finally we have learned to behave in a restaurant. Demand the beverage, food, and pay. First the teacher pretended to be the waiter and then one of my colleagues. 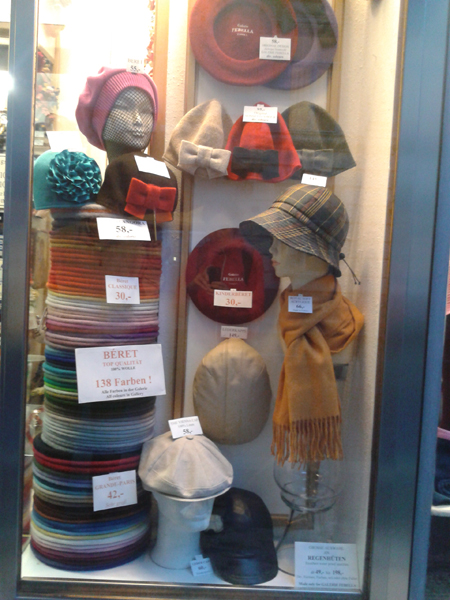 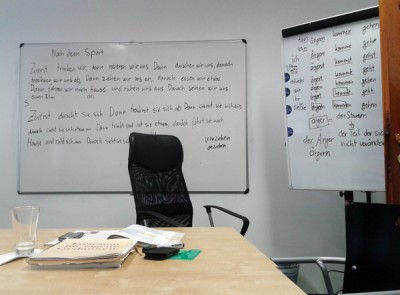 Before going to the DeutschAkademie, studied German myself, with several books of grammar exercises, reading books like “Aladdin und die Wunderlampe” (with only 4 or 5 pages) and a computer program. But you always have the doubt of whether I’m pronouncing it right or if they understand me when I stay alone “versus” the Austrians.

So here is my recommendation! 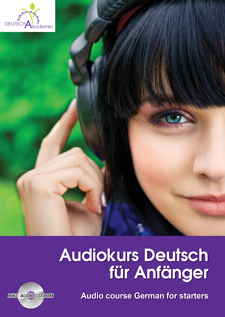 It’s a great choice, because while you hear a story, they repeat and translate the most difficult parts.

The audio course that I’m working with now, begins with an introduction to a story, later reviews the specific vocabulary of the topic BEFORE continuing with the dialogue. Thus you review the new vocabulary when you are already acquainted with it.

Now begins the part of grammar explained in English, with examples from history and other new examples. Finally some exercises containing the explained grammar.

As it’s recorded you can listen it while doing other tasks or while going to academy or work. For me it is a great help to learn German. 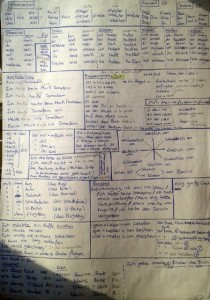 Today I write about a unique building of the city of Vienna, whose architect Adolf Loos (architect precursor of modern architecture and design, functional and without ornaments). Anyone who knows Vienna knows this building, which has a unique history. 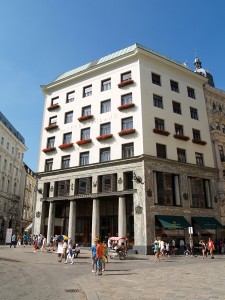 The Loos Haus was built from 1910 in front of the Hofburg, the palace of the Emperor. Thanks to win the competition to build a new building for the company Schneider Goldman & Salatsch.Loos decided to build a smooth and unadorned faÃ§ade.The shopping area, coated marble clearly distinguishes the living area, with a stucco facade unadorned, and strongly incised windows. The house is a stone revealed, illustrating the rejection of all ornament, as appropriate or modernist historicism, instead bet on the materials and proportions.
The outer scandalous pushed the exquisite decor and the spatial structure to the background.
This shocked everyone, both the company that had called the contest as the emperor himself, therefore the construction stopped. So would Loos said pots in the windows to put flowers and resumed work. But, as you see in the picture, which was made â€‹â€‹famous architect them randomly.
This incurred the wrath of the Emperor, who decided not to re-enter his palace never giving the door just before the Loos Haus and wood wall up with all the windows that overlooked the Palace Loos Haus.
Today is one of the most representative modern architecture in Vienna.

When I studied architecture received as a gift a book about an Austrian artist who had never heard of, Friedensreich Hundertwasser.

Finding myself studying in Vienna from July, wanted to visit at least one of the famous buildings, the Hundertwasser. 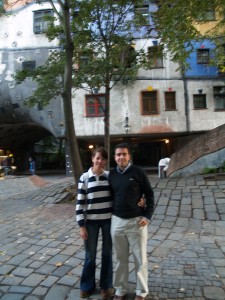 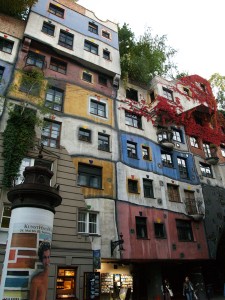 Originally trained as a painter, became interested in a form of architecture in harmony with man and nature, and in 1977 the mayor of Vienna gave the opportunity for a residential complex according to your ideas.

Not being an architect, the council hired Josef Krawina so she could bring their ideas to reality, and was carried out between 1983 and 1986.

Construction is completely opposite to the Vienna skyline, this building stands colorful curves and lines, undulating surfaces, grass cover and vegetation climbing between windows. Hundertwasser is said that he received no financial benefit from this project, their motivation was to prevent something ugly was built in its place.

I found it curious that this complex being part of the cultural heritage of Vienna, has not been converted into a museum and is inhabited as any apartment building.It is one of the venues in the city of Vienna.