Everybody has heard about Vienna’s most famous desserts – apple strudel and cake Sacher. However, I have just recently found out about one more delicious flour dish of Austrian cuisine to be tasted. It’s called Kaiserschmarrn. According to the legend, it was named in such a way due to the fact that it was the favorite meal of the Emperor Franz Joseph I and thus the words Kaiser (emperor) and Schmarren (a scrambled or shredded dish) were combined. There are many legends how the meal was created. One story states that sometimes sweet pancakes beloved by the emperor became too thick or torn during the process of cooking and the cook had to give them to servants as a dish called Kaisershmarrn, because they were not appropriate for the emperor’s table (A Schmarrn des am Kaiser zu servieren – nonsense or rubbish to be served to the emperor). Another legend says that Franz Joseph’s wife was a poor cook and couldn’t flip pancakes efficiently.

You can order Kaiserschmarrn nearly at every restaurant or café in Vienna. I tried it in Mozart café where it seemed to be so tasty that I found the receipt to cook it at home for my parents and friends. 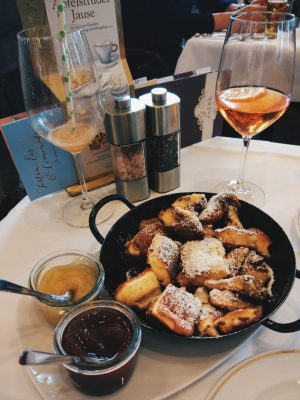 In case you would like to do the same for the preparation of 4 portions you need 1,5 cups of wheat flour, 150 ml or 0,625 cups of milk, 8 chicken eggs, 6 tbsp of sugar, 4 tbsp of raisins and a pinch of salt. The eggs are divided into yolks and whites. Beat the latter until stiff, mix the yolks with flour and then add milk, washed raisins and salt. Beat the mixture until the formation of peaks, gently mix in the dough and add sugar. There are other options of extra ingredients such as almond petals (4 tbsp) and cinnamon (2 tbsp). Moreover, the raisins can be soaked in rum (2 tbsp) after washing.

When the dough is ready it is poured into a pan and fried until the underside is ready. Then the dough in the grilling process is separated into small pieces and fried until a crispy crust is formed. Kaisershmarrn is usually served with vanilla sauce or plum/apple jam and sprinkled with powdered sugar.