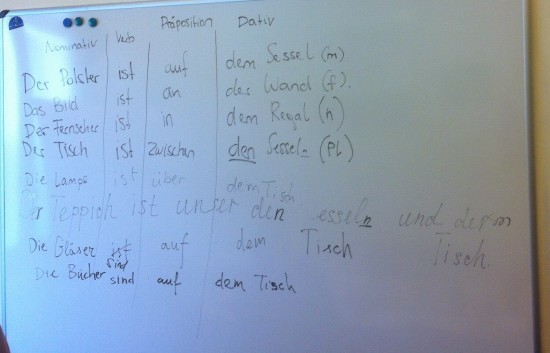 Today was the first day of my German classes. I started in 1A-2.  I confess to being a little nervous and I really didn’t know what to expect.  I came straight from dropping my children off to school and was the first one there besides the instructor Daniella. She began by asking me, in German, my name and where I was from and why I wanted to learn German. I appreciated very much her patience in repeating questions and speaking slowly and waiting for understanding to come instead of clarifying in English. There is a impediment to truth telling when you do not know a language. When asked what my hobbies were I searched for words I knew that could be considered hobbies. Swimming was one of them, because one of my children’s classes recently went. When I was young I swam quite a lot, but now I can’t honestly call it a hobby.

We began with prepositions and the dative case for definite and indefinite articles. English may be complicated in other areas, but it is a gift to all students of English that nouns do not have gender. There is no rhyme or reason to the gender of German nouns; they simple must be learned. My brain was full by the end of class, but there was something very satisfying in knowing for three hours I had worked in German.  And my children can take comfort in knowing that now Mama too has homework.

One thought on “Beginning Class”