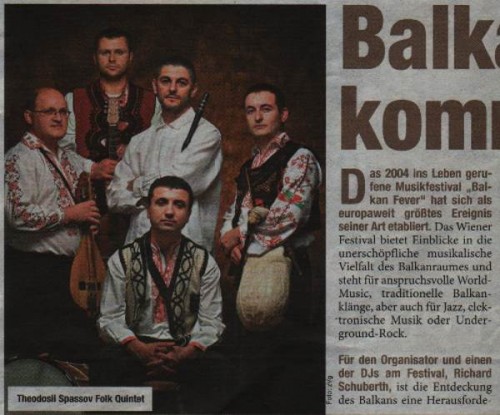 I started my first post in this blog in German, but to be honest my German is still not that good to write long and not-boring-posts. So I guess I will be writing in English from time to time.
In my posts, I will be writing about my experience in Vienna and learning Deutsch and my view of the city. I will also try to write about some of the events going on in these days in Vienna and you might be interested as well. I will try to include some “Deutsch tip of the dayâ€ in some of my post. Like all the languages there are tons of tiny yet important details that you could easily neglect them but if you notice and pay attention to them, they will make a difference. I am doing A2.2 right now, so don’t expect anything from ‘Faust’, but some thing in the order of ‘Dative’ and ‘Akkusativ’. I am sure there are many of us still struggling with the Dativ and Akkusativ every day….
Today I want to tell you about a Balkan music festival taking place between April 26th and May 13th. It is called Balkan Fever (2012), it was initiated in 2004 and on the website (https://balkanfever.at/de/)it is mentioned as “the largest music event of its kind in Europeâ€ which I found a bit exaggerated, but any how. There are not so many bands in this festival, but a few of them are quite interesting.
The first one I definitely suggest to the ‘World Music’ lovers is the Romanian band “Fanfare Shukarâ€. I’ve heard their music before and they have some good works. it is a traditional band from the village of Zece PrÃ£jini in Romania. Check your agenda for April 28th and if you are looking forward to some energetic Balkan bras band music, don’t miss it.
My other suggestion is a Iranian/Serbian band called “Sormehâ€ (Persian for eye liner) on May 3rd. There you can get the chance to hear a more experimental music; Big variety of themes ranging from Iranian, Serbian, to East Europe and Yiddish music. I listened to some of their works available on the Internet and I found their music interesting.
(picture from Heute newspaper:Theodosii Spassov Folk Quintet)