When I married to a handsome Austrian man it became clear that, some time, maybe not in the very distant future I will have to learn German. Just to be able to communicate with the family or raising kids together.
Well, we were living in California, so I wasn’t very motivated. I wanted to show him that I’m interested in his culture so I started an on-line course but, I didn’t get further than the basics.
The city where we lived was founded by a Swiss man though, and a lot of German people moved there to find their luck during the gold rush. It has a huge German community (from first generation Germans to German descendants), they have an official beer fest, most of the women own at least one dirndl (sometimes more) and Heidi is a really common name. The local Turnverein offers German lessons and they are sold out fast.

When my husband got his new position in Vienna, I was shocked. I knew that without speaking the language I won’t find a good job and I didn’t want to sit at home. So I decided to learn German in all my free time but, I was too worried so I drove to San Francisco instead 🙂 It calmed me down, our moving date seemed far enough. We had only two months left…

So I came to Vienna with a very basic knowledge (level A1.1)
which of course wasn’t enough for anything. We started to look for courses. I wanted something very intensive where I can feel motivated and we practice a lot. My husband found DeutschAkademie, it had really good reviews so we decided to give it a try.
I had to write a test to see which level I could fit in. In March I started A1.2. I knew most of the things already but I couldn’t use them, I recognized the words but they didn’t come to my mind in everyday situations, I mixed up the articles and the “Personalpronomen”.
Our teacher was wonderful. Patient over all 🙂 We were practicing a lot, we were forced to talk, create sentences, use the proper articles.
I absolutely loved it! Slowly, my German started to improve. First I was too shy to talk, what if I mix up the articles or use dativ instead of akkusativ? Well, who cares? Just talk as much as possible and it will get better.

Last week we visited my mother in law again and we could have our first real conversation! I was very proud of myself – also my husband. Hard work really pays off 🙂

Find someone who can support you while studying: 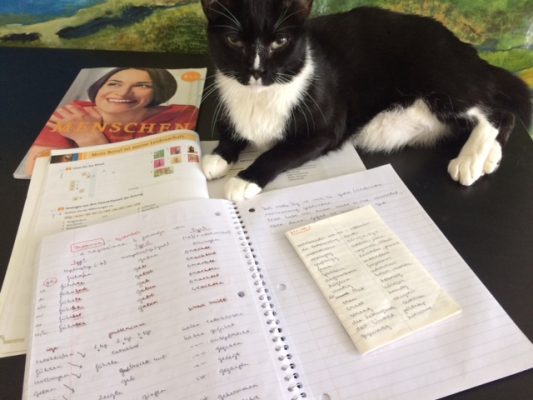