Last weekend we went to Halloween party, we had like hundreds of options but eventually we chose to go to the Prater event since it was so mainstream. I also watched the after movie from last year and it really looked cool.

The plan was to get there at six in the evening so that we can watch the parade too, but we totally missed that unfortunately. I haven’t been at too many Halloween parties, this one was the second actually. The first Halloween party I attended was last year in some bar in Cluj-Napoca (Romania), I really enjoyed the costume part so I was excited this year, thinking that I will make myself a hell of costume. Well…wasn’t so….it was more like a last minute costume. I was a bit disappointed in myself, especially when I got to Prater park and saw the awesome costumes that some people had. Didn’t felt so bad though when I find out that that the cool costume there were of people that worked in Prater. Some of them were really good, my favorite: I called him “the bone collector”, was this guy wearing a rain coat and plastic boots, covered in blood, you couldn’t see his face at all and he was carrying a bunch of bones. Then was this couple…I think they were something like crows or dark angels, don’t know for sure, these were like fancy scary, a very nice dark costume, carefully painted on their faces, with very nice and realistic dark wings. Another one that I founded really cool was the girl with no face, a small girl dressed all in a gray costume and you couldn’t see her face, no eyes, no mouth, no nothing, it was creepy, you don’t necessarily need to be bloody or disgusting to be scary.
We went to the labyrinth of terror, this was and interesting experience  and gave us the creeps: a bloody bathroom with this hanging in the shower, weird birds running after you, clowns ….because always has to be a clown somewhere, some human-pig-butcher with an ax. 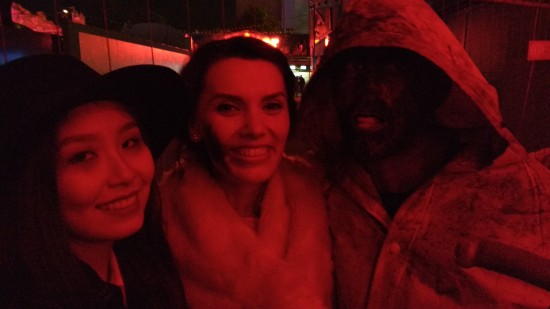 Afterwards we were thinking to go to Prater Dome- most important club in town they say, it was impossible to do that, there was a line for like 2 hours or more and I wasn’t even sure that they are still allowing people to enter so we gave up with this one. We decided to go in the city to look for a bar, a club or just a place to hang out. The city was so crowded on Saturday night, everywhere you looked you could have found a Halloween party. In my country we don’t really celebrate Halloween, yes we have some parties here and there but you will never see so many people with costumes on the streets. They were saying that Austrian people also don’t make such a big thing of this…well, seemed pretty big deal to me.

Cheers to a fun loaded November!