Today is 15th August and we don´t have class, it´s a public holiday in Austria (Feast of the Assumption of Mary). I don´t want to waste my time so I am writing another blog post for you :-).

Yesterday evening was fun! DeutschAkademie organized for us – students – the monthly Stammtisch and I were there!

I assume that you are not familiar with this word. I had to also google it. According to Wikipedia, Stammtisch is “is an informal group meeting held on a regular basis, and also the usually large, often round table around which the group meets. A Stammtisch is not a structured meeting, but rather a friendly get-together.” The yesterday one´s was accurately like this.  On the program was to speak German, meet like-minded people from this month classes and play board games.

Guys, I fell in love with the place, where the Stammtisch was held. It is a park, according to other guys it´s a university campus with different pubs and restaurants, playground and open-air cinema! If you want to check it by yourself, follow this address: Alser Str. 4, Vienna.

I was 100 % sure I want to go when I heard about this event. I talked with my Hungarian friend Kriszti who I know from my conversation classes and she decided to join as well. We arrived a little bit later. There were already people from the Akademie and they were playing games. We sat down and soon, our new friends, an international couple (she from Romania, he from Poland) joined us. We started to chat in German, it was fun and we got to know each other better. Later, we moved to the bigger table, where another international couple was sitting (she from Ukrania, he from Russia living in Austria). We played UNO and Scrabble, drank, spoke partly German partly English and from my point of view, we had a lot of fun! 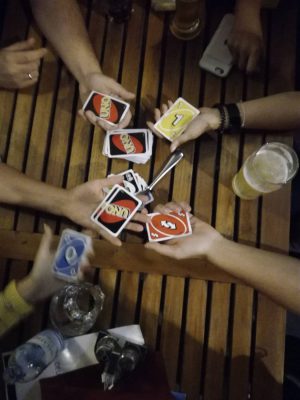 We played UNO and Scrabble. Scrabble was not easy to play in German language.

I forget to mention, that in the beginning, the ladies from DeutschAkademie, who organized this Stammtisch gave us a small challenge. Each of us had to guess, how many sweets were in the glass on the table. We had to write it down and the one who guesses the closest is the winner. And you know what? I guessed the second closest number! Woow! I won a beautiful bag with DeutschAkademie logo and 6 EUR voucher for drinks in the restaurant, where we were playing the games. Yaay! 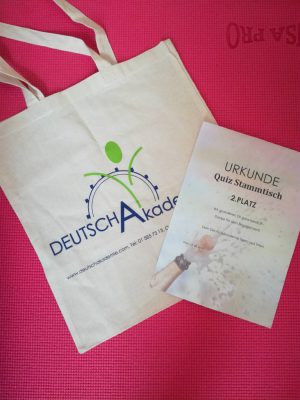 This is what I won.

I would like to thank you to ladies from Deutsch Akademie for this nice evening program. I hope I will have to have a chance to join again (I am thinking to continue studying at Deutsch Akademie from October or November). 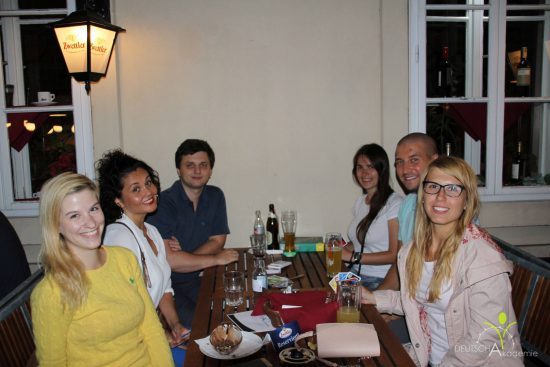 Do you have experience with Stammtischs or similar get-together meetings? Let me know in comments.