It’s been quite a long time since I’ve started this blog however I still haven’t mentioned the most obvious Vienna’s treasure – musical heritage. Today’s post will rectify the situation.

There is a significant number of articles guiding how to buy cheap tickets to opera. I would like to share my experience of going to Musikverein.

The musical philharmonic of Vienna is situated at Karlsplatz and appeared to be a majestic building of soft pink color. The interior of the building is magnificent as well. The most luxurious decorations characterize The Great Hall of Musikverein, which is also called the “Golden Hall”. Antique female figures, Apollo and muse amaze the visitors, meanwhile the acoustics of the room is famous all over the world. A multimillion audience can watch the New Year concert of the Vienna Philharmonic Orchestra which is broadcasted from the Great Hall.

Besides the Golden hall there are four more but smaller. My friend and I visited one of these halls and listened to the concert of Viennese virtuosos. Without exaggeration I can say that the sound was magnificent, and the performance took us to the 18th-19th centuries and made us think about the eternal, immaterial and beautiful of this world. 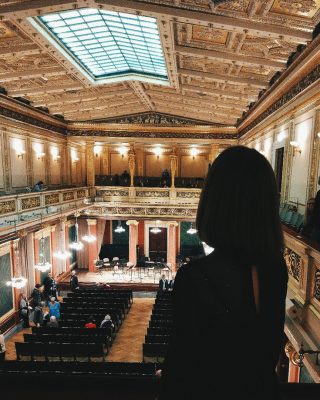 The program of concerts is published on Musikverein website where you can also buy the tickets and book the places.

Despite the positive impression I advise you to choose pieces of music you know because it was quite difficult to distinguish the composers even when we were acquainted with their main musical works.