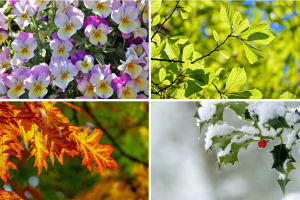 Vienna has a mild continental climate. Because of the influence of the dry pannonic climate from Hungary, Vienna has a markedly lower rate of precipitation than in those Austrian states situated in the Alps.

In Salzburg it rains twice as much as in Vienna. It is worthwhile coming to Vienna in any season to learn German.

Spring begins in Vienna between the middle and end of March, and often merges seamlessly into summer. In the last few years, it was possible to visit the many free swimming pools as early as May.

The summer months are hot. Temperatures often reach 30 degrees or more. But equally, there can be rainy days. So anyone who would like to learn German in Vienna in the summer should pack a raincoat as well as bathing gear.

From September on warm clothing is essential. Autumn often begins overnight the wind which often blows in the autumn months makes temperatures seem lower than they are.

As it snows in Vienna and the streets can become iced over, strong snow-proof shoes are an absolute must in winter. The coldest months are December and January. In these times one should expect subzero temperatures.