Today was the last day of the German course. We had a short test and were learning more about genitiv. It won’t be my favorite 🙂
In the test I only had a few mistakes, mostly because it is hard to remember all these words. This is why I started to watch TV, I recognize the words there and I remember them easier then.

I really liked the course, it is very detailed, our teacher answered all our questions and was patient with us. The location was excellent, easy to reach, close to the Mariahilferstraße.
It is great that I see every day that I improve. I speak better, I understand the people more. Even my husband noticed that.

The course is over so this is my last post, have fun and good luck with German!

(This is a double rainbow over Vienna yesterday) 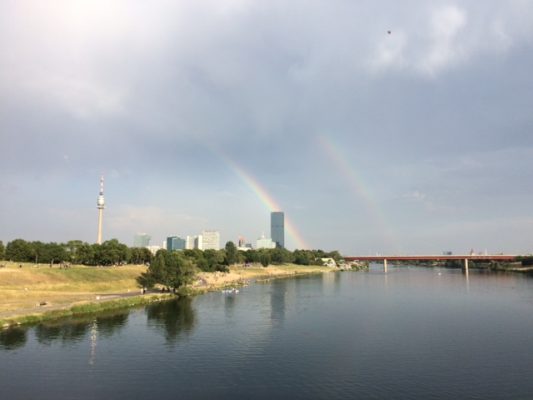 Time flies, today we arrived at the end of our third week. The next one will be the last for B1.1, then we can start B1.2. I will definitely continue and take a break in August maybe.

I see how much we could improve in a few weeks. Now we can ask help and recommendations in a store, talk about different opinions or write a complaint letter, even a presentation.
Every class we practice a lot and talk more and more. We were even learning about one of my favorite topics – pets.

Our group is great and every day we know a little bit more about each other by talking about exciting topics. I never thought that learning German can be fun 🙂

German is a very difficult language if you want to speak it well. I started to read a book, the “Little Prince”, and it is a very good practice. When I was learning French, My teacher recommended it to us because of its simple language. It was a great idea and it works with German as well.
I also started to watch a show, with subtitles of course, the Vorstadtwiber, it is very funny and entertaining. It is like “Desperate Housewives” in the USA, but a little bit more dirty 🙂 It is very popular now in Austria and about five rich women who live in the fancy part of Vienna.

I can recommend to practice and try to talk even more from now on, because at B1 you already have the knowledge to have conversations so don’t be shy!

This is us yesterday in the Parliament 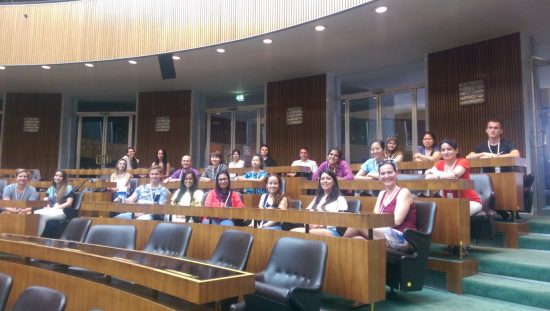 Today’s German class was really fun, we were talking about our pets. Everybody was excited about it and of course, the old topic came up: dogs or cats? These animals are the most popular pets and they have very different characters.

Dogs are known to be faithful to you while cats seem more independent and less loving. In my whole life I considered myself as a “dog person”, but we have a cat for a year now, and my opinion is changing 🙂 Though I still think a dog is a perfect choice and a wonderful friend, a cat needs less time and effort. And our cat is a sweetheart, greets me when I come home, talks to me, purrs a lot, he is really affectionate! I think I understand “cat people” more now 🙂

I got my first pets, two little tortoises, at the age of 10. I was overwhelmed with joy. I wanted to prove my mom that I can take responsibilities. I was feeding and cleaning them regularly. Unfortunately, they didn’t live long, tortoises are very sensitive little animals and my room was too cold for them.
Then I got a lovely guinea pig called Cinderella who was my beloved company for long years while studying or watching TV.
Then, after 18, I had guinea pigs again. You cannot forget to feed them because they remind you with their sweet “oink oink” and I think they are a perfect choice for young adults who don’t spend too much time at home. Guinea pigs feel the best with another guinea pig so they never can bored. In German, guinea pig is “Meerschweinchen”. What a lovely word 🙂

I think having a pet is wonderful. They become our friends for their whole life and love us unconditionally. And of course they are sooo cute and entertaining 🙂 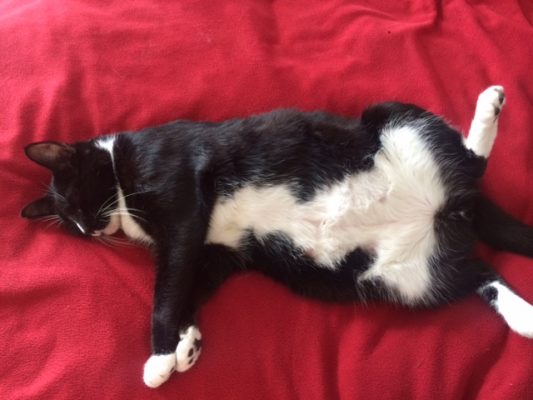 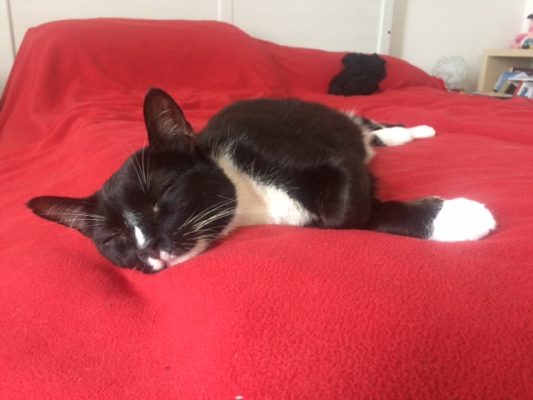 Vienna is an international city, and you can see this in the Deutschkurs, too. People are from Romania, Iran, Indonesia, Japan, Spain, Mexico, Ukraine and Hungary (me). Different cultures and habits meet every day. Last month there was a woman from Tanzania. I love to hear the stories from all over the world like what their motivation is, how their hometown is or how they met their loved one.

People are studying at the university, writing their PhD, or just trying to find a better job. German is not an easy language and takes hard work to improve.

This is the second week of the course, it started a week later, but at least we had some time to go over everything again. At B1.1 we practice and talk even more, German started to become the part of our lives. I don’t use English anymore in the city and that makes me feel more confident. Though last time we went to a spa the waiter in the restaurant didn’t understand my “school German” so I had to ask for help 🙂 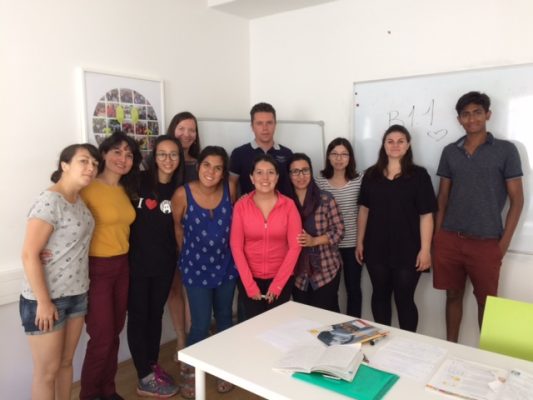 Back in 2007, when Apple released the first iPhone, few people would have imagined what a game changing device the smartphone would eventually become. In less than ten years since, the phone moved from being a cumbersome contraption to call family and friends and snapping rudimentary pictures to become an indispensable personal assistant that helps us in almost all aspects of our life. We now have hundreds of thousands of apps designed to help with every possible activity (or the lack of any). Students, as a group in particular have benefited immensely from the arrival of the smartphone. We can now access collections from the world’s best libraries and connect with leading researchers from every field with our discreet handhelds and it was only a matter of time before the app revolution had its impact on the linguistic skills improvement front as well.

A simple search on any major appstore yields hundreds of apps that claim to aid language skills and many of them have excellent course material and a fun interface to make the experience interesting and hopefully, rewarding. Duoling, Fluenz, Babbel and Rocket Languages are some of the most famous apps out there and are used by millions of people to brush up on language skills. However, can apps really offer a credible alternative to classroom based study? The short answer is of course no, not in the foreseeable future at least, but they can be tremendously helpful aids and must be explored by every serious language student.

Over time, app design has improved by leaps and bounds. Gone are the days when students would have to repeatedly tap an arrow key to painstakingly move the cursor near the right answer to see an apple and a star appear on the monitor as the reward. Developers now take great pains to make their apps engaging, interactive and effective. Many language apps feature interesting technology like speech recognition and natural language processing techniques to make exercises comprehensive and to more effectively simulate a classroom atmosphere. Apart from all this, apps also offer unparalleled convenience – one can take up exercises as and when convenient, in the U-Bahn, waiting for the bus, before falling asleep (although many sleep therapists discourage phone usage before nap time).

I have personally found that apps are a great way to practice and cement vocabulary training. However, that said, I strongly feel that current language apps lack the level of direct interaction that an average student needs to pick up many basic and advanced linguistic skills that can easily be taught in the classroom.

For example, the app may help you remember the correct article for mannlich nouns when used with ‘besuchen’ or ‘brauchen’, but they don’t necessarily do a good job teaching you about when the accusative case kicks in and what effect it can have on the sentence formation. The problem only compounds when other complications get added to the mix, such as the impact of prepositions and subtleties linked to subject/object focus. Current apps, in general have not figured out a way to clear the many doubts and questions that crop up in a student’s head and just expect the user to go through exercises and mentally note what’s correct and what’s not.

The lack of a troubleshooting ‘Guru’, who can explain fundamentals, simplify, aid and warn against pitfalls is the real drawback with many of these apps and that’s why I think they cannot effectively substitute a classroom course. So, while students may use these apps as aids, they should definitely take up structured courses if they are serious about learning a new language.

To sum up, language apps are fun and help you practice and perfect many skills that are needed to speak good Deutsche, but they are no match for a real life teacher and colleague environment. It’s much the same way that we all find Siri amusing and useful, but we don’t necessarily ditch our friends to spend more time talking to her.

Hello! My name is Roman. I was born in Russia, in the beautiful city St.-Petersburg.I’ve been living in Vienna for already 2.5 years. Currently, I am writing my Bachelor Thesis and doing my Internship. Also, I dedicate much of my time to music…by now I am playing bass guitar in two bands: High Journey (drum’n’bass, chill out, trance) and in Midnight Special (hard rock). Now, I have started visiting German Course in Deutsch Akademie and I hope it will be productive and fun.I have started this course from the level 2A and I hope that by the end of the month I will reach the 2B level. I will write about my experiences during this month and I hope that it is going to be helpful for anyone 🙂