Yesterday I finally got to experiment going to an Austrian Weinachtsmarkt with some friends. We chose to go to the one am Hof, because we heard there are more traditional and handmade items there.

And indeed, every stand had neatly crafted items, such as Christmas decorations for the house, for the tree or all sorts of gift ideas for your friends and loved ones. I particularly liked the homemade jewelry stand (I am really into them in general) and this stand that sold handmade stars, which light up. 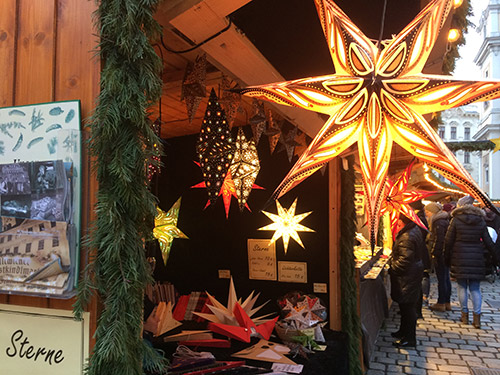 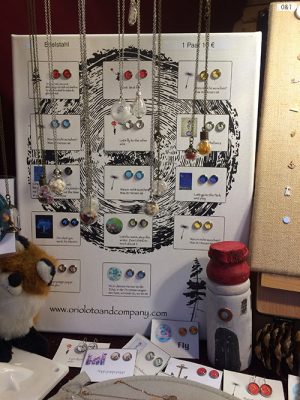 It was a nice, cold but memorable evening. We had some Glühwein to heat up, and enjoyed some caramelized almonds, with rum flavor on the streets of Vienna. 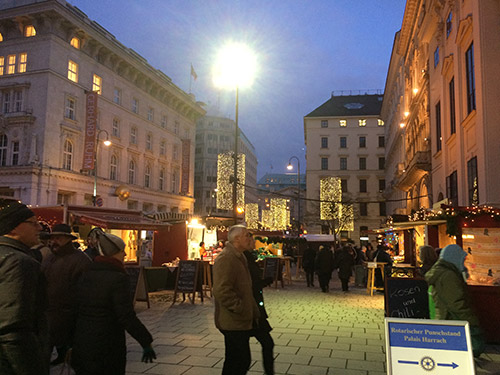 Looking forward to discovering new Weinachsmarkts, which is your favorite one? Tell me in the comments below.

Come December I have enrolled in a Conversation class here at Deutschakademie and I am going to take a little break from writing on the blog, since the holidays are coming and all. But hopefully I’ll return in January with impressions from the C1 class.

‘Til then I wish you all Happy holidays – Frohe Weinachten! and see you soon. 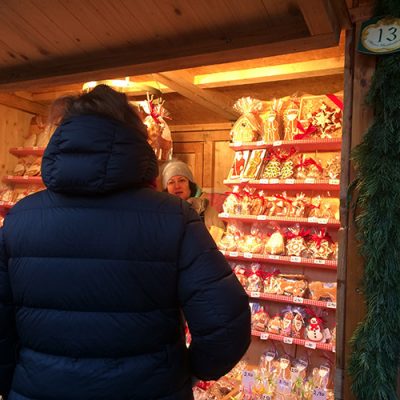 As I mentioned in the last blog post, yesterday was the final day of class. We completed the B2.2 class and, as usual, at the end we received documentation of attendance, as well as some useful tips, for learning German from now on.

Our teacher recommended a comprehensive Grammar book, called Lehr-und Übungsbuch der deutschen Grammatik, from Hueber, written by Dreyer & Schmitt. I got a chance to flip through it and it talks about every part of speech and how it is used in the German language. Very useful if you like your information all structured and easy to find. 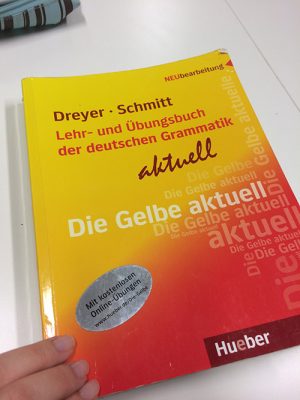 Afterwards we took a picture together, to commemorate the occasion and went out to celebrate to Bier & Biereli, a very quaint beer-oriented bar, just 50 meters away from the Deutsch Akademie. Here we toasted, exchanged stories and found ways to keep in touch in a very cool setting, with hundreds and hundreds of beer cans on the walls, as well as the “Bier ist gesund” motto by the bar. A very fun and likeable group that I hope I’ll run into in future Deutsch Akademie classes. 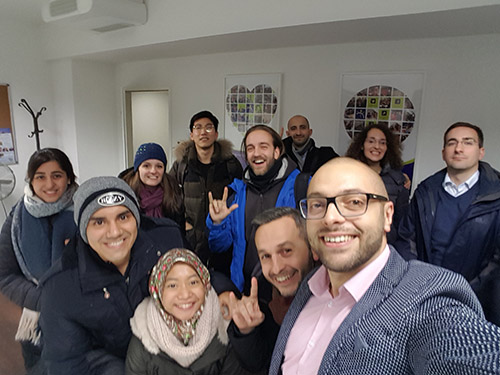 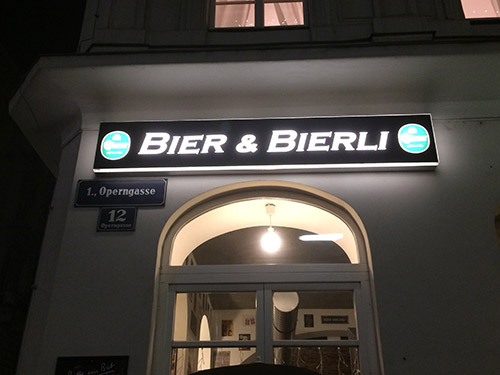 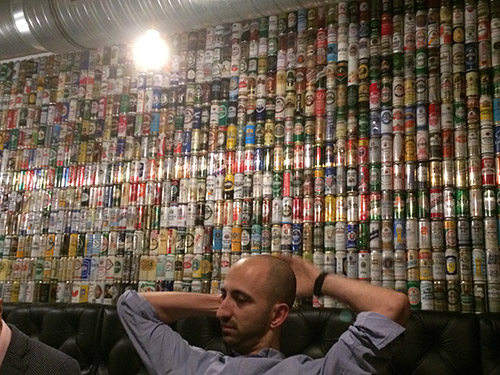 In the last day of class our teacher prepared a game for us, in which we each had to write on 5 cards what we consider important from what we learned, or what useful is. Afterwards, we grouped ourselves in groups with at least 3 people, and we mixed all the cards together. 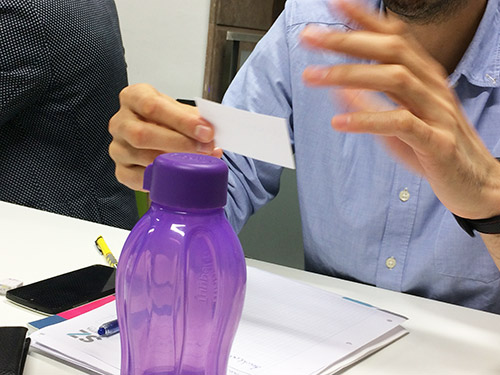 We then extracted the cards, one by one, and did a small iteration of what we learned. Of course, some things repeated themselves, but the themes were also diverse and it enabled us to really remember this past month. 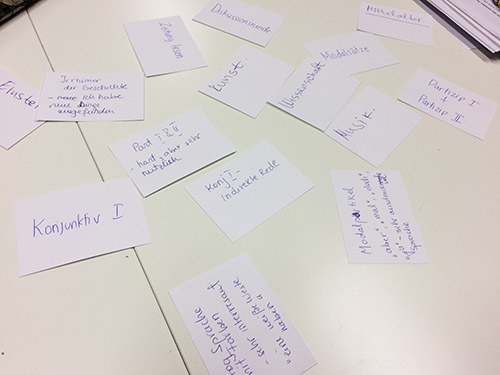 Oh, and did I also tell you that we had a little surprise when we came into class today? We had chocolate lined up, waiting to reward us. Such a nice detail, I think we all enjoyed it. 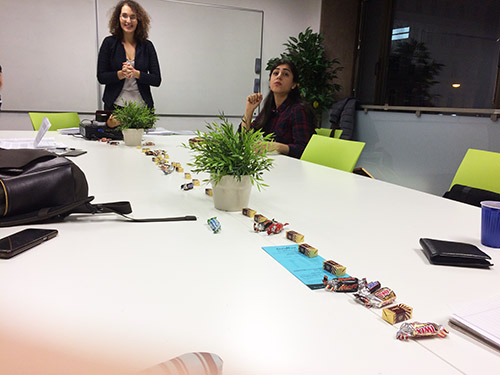 This week in class we had a theme about decisions and decision making. There was a text that talked about the process of taking a decision, and afterwards we talked amongst ourselves, in able to dig deeper into the matter.

We split into three groups, which received each a poster and we had to brainstorm ideas, or write down compelling arguments from the text.

There was a lot of talk about gut feeling, and how it is important to follow it, especially when it comes to big decisions. Also, list making came into question, as a way to write down all the important information so you have the big picture in front of you. When you are unsure, you should of course consult others, experts, friends, people who have had similar choices, but what it comes down to in the end is what is best for you, because decision making can differ so greatly from one person to the other.

I will leave you with the posters that we made in class, in hopes you will discover other useful tips. 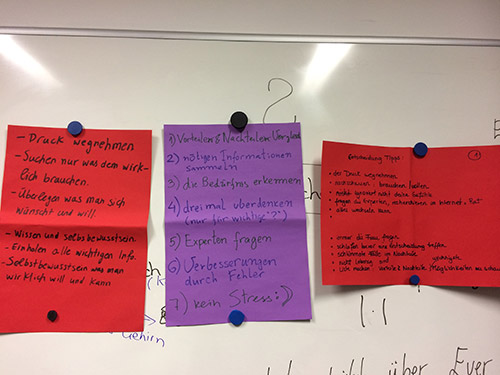 As we were walking towards the last Stammtisch, on the Ringstraße, I saw this majestic building on the horizon and asked the others what it was. Votivkirche, they replied, as I lingered behind to examine the impressive building further.

When I got home, I looked more up about this interesting looking church, and it turns out its history is even more intriguing. The church was inaugurated by the Emperor Franz Joseph ‘s brother Archduke Ferdinand Maximilian, as a way to thank God for sparing the Emperor’s life, after a failed attempt on his life. 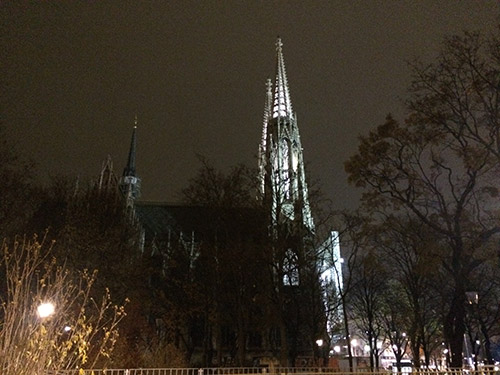 Construction of the church began in 1856, and it was dedicated twenty-six years later on April 24, 1879, the occasion of the silver jubilee of the royal couple. It was one of the first buildings on the Ringstraße at that time, constructed in a neo-Gothic style. It is said, from afar, tourists often mistake the Votivkirche with the Stephansdom, but in reality the two buildings are more than 700 years apart in apparition, Stephansdom being established in 1147.

We’ve experienced it many times: the German we learn inside the Deutschakademie can be so different from what we hear ourside, in Vienna. Austrians have a very melodic way of speaking, sometimes trimming, shortening or using different words altogether.

Personally, I think it very desirable for me to learn these tiny differences, and the subtle nuances that make the Austrian dialect what it is. However, I know this process will mainly take time and will probably be accomplished over the course of years of living here, while getting accustomed to the local language.

A good way to start though, when you want to understand a words you have heard socially, but google translate can’t pick up on, is to acquire an Austrian dictionary, like the one recommended by our teacher. Wörterbuch des Wienerischen, by Robert Sedlaczek, is perhaps the first step into understanding the locals better, making friends and fitting in. 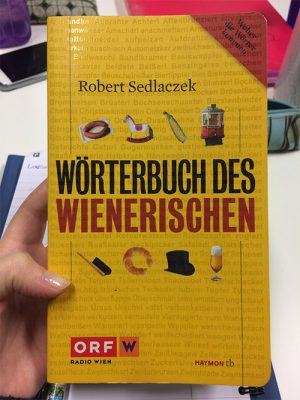 This week, in class, we took part in a new vocabulary game, as a way of repeating the new words we had learned. On a sheet of paper, we were to describe two words in German on post-its, and give clues as to what they might be. 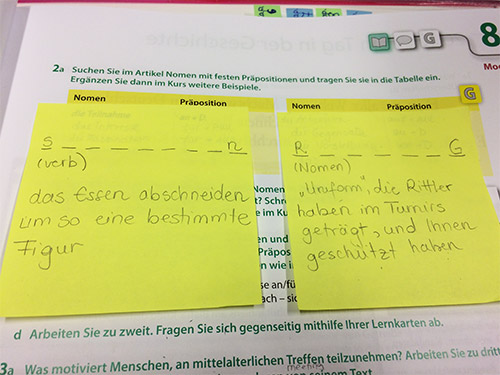 Then everyone passed the two notes over to their right neighbor, which was tasked with guessing the words. Afterwards, the two would consult among themselves, to make sure the riddle was solved.

It really was a fun and interactive way to go over newly learned words. I like it a lot that our teacher always comes up with new activities, it makes the German class all that more fun and friendly.

On Monday we had a group discussion, as a way to determine our grade for Speaking. It was a very interesting evening, and our teacher had prepared two texts beforehand, which we chose our theme from.

The discussion was about the disappearance of the Austrian dialect, in favor of a more generic German, or if it is just a transformation of the language, a normal and organic evolution. Everyone was very engaged in the discussion, and brought some really interesting questions and arguments to the table, as such the discussion which was supposed to take half an hour, extended for over an hour. 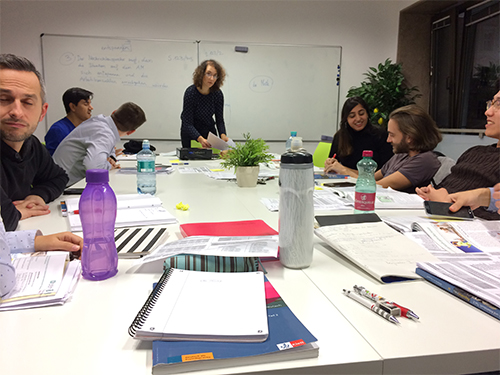 We talked about dialects, and foreigner integration, but also about language as a living part of a culture, and the importance of passing on the Austrian German to future generations. Then we extended the topic to dialects in our respective countries, how important they are and whether or not it would be easier if everyone spoke the same language. Taking it a bit further, we projected into the future, and discussed the possibility of there being only one universal language, at some point in time.

A very rich and engaging discussion, I really enjoyed being a part of it and would be very interested in joining such events in the future.

Yesterday was the monthly get-together event, Stammtisch, which took place at the Gangl bar, near the university campus, as it usually does. My class got there around 10 pm, since we had the evening class to finish, but you could see the people were enjoying themselves. They had made some teambuilding games, which seemed fun, it’s too bad we missed those. 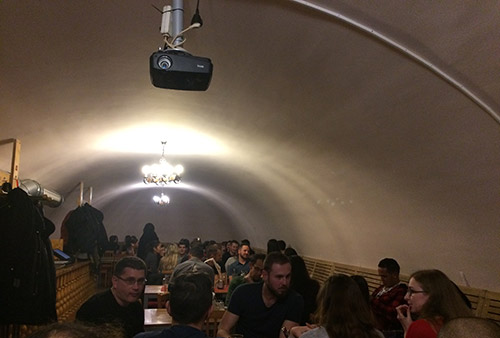 Stammtisch is a good opportunity to socialize and a nice way to meet new people, especially if you are new in Vienna and don’t have many friends here. If you haven’t been to one until now, I recommend you try it for yourself. It is also a very nice exercise to speak in German in social situations. I went along with a few colleagues from the B2.2 class and our teacher, and shared some funny stories.

What experiences have you had so far with Stammtisch? Let us know in the comments below!

If you’re like me, around this time you will have gotten the results from the first test of the level back. Usually in the Deutschakademie there are two tests, one after the first week, and one after the third week, to assess what you have learned so far.

I’m not going to lie to you, I was a bit disappointed by the first test I ever got back, because I had made many mistakes despite learning all weekend before. However, since then I have begun to see the process differently: I’m perceiving it more like a means to quantify what you have understood, and what you need to work more on in the future.

Tests are a good way to understand how far you’ve gotten, and to determine, for instance, if you need to prepare yourself more for an official German language test. Of course, everyone wants to do good in tests, but try and look at it from this point of view, and focus on learning rather than grades. You will see how much more fun it is! Good luck!

Yesterday in class we started with a new topic: Art. The teacher asked us to bring a photo of something we consider a piece of art and to explain why that is artistic to us. Some of my colleagues brought pictures of known pieces of art, such as paintings or statues, while others have brought self made art, pictures that had a special significance to them, or that captured a moment which made them feel a certain memorable way.

Afterwards, we were given a challenge: to write on a postit, in our own words, what art means to each of us. Then we got up and placed the post-it somewhere in the class, so that everybody could walk around and read the other’s interpretations. 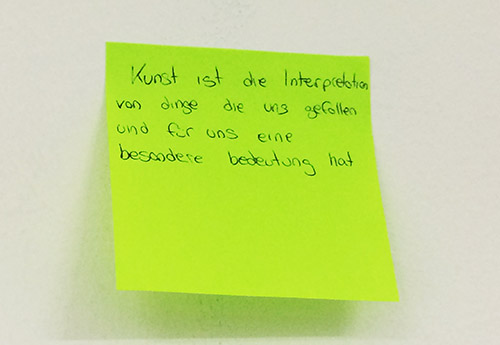 I thoroughly enjoyed everyone’s perspective on the subject and it was a fun exercise to do. To conclude, I’ll leave you with some of my classmate’s interpretations: 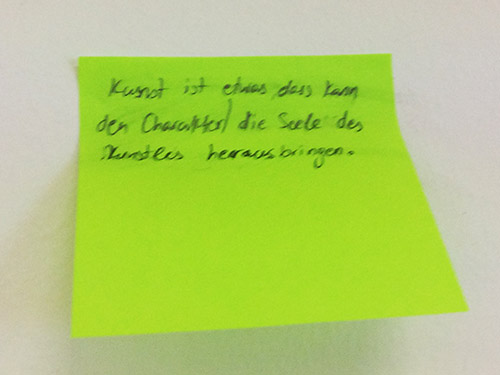 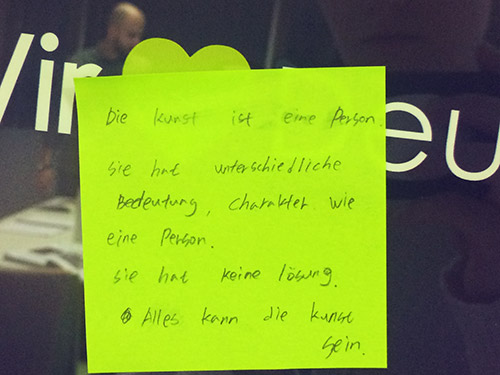 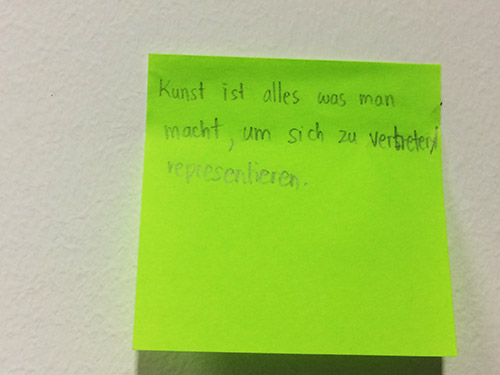